Being Friends With Boys, by Terra Elan McVoy 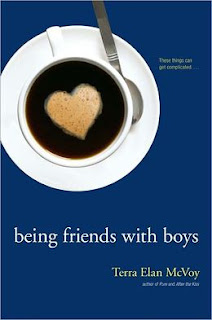 Charlotte isn't very good with girls and she's at her most comfortable around her guy friends, whether it's long-time friend Oliver (who leads the band that Charlotte manages) or newer guys like Trip.  But the drawback with hanging out with guys is that they aren't very good for baring your heart to.  Far worse, though, is navigating the fine line between friendship and romance with them.

There is an overall story about the band (Sad Jackal) that Charlotte and her boys are in and their struggles to stay together (and a small subplot about Charlotte finding her voice quite literally as a singer for the band), but the vast majority of the book is simply about navigating the minefield of adolescent romance and friendship.  With its sensitive ear to how older teens interrelate, the book will resonate with its target audience.  For older readers, it mostly elicited groans of recognition (I'm reminded of a friend of mine who explained she couldn't read YA because it brought back up all those painful memories).  The idea of teens trying to balance romantic and platonic relationships is a good subject and treated with great authenticity by McVoy.

In comparison with her other books (which weren't that bad to begin with) this is really a stand out novel.  McVoy navigates the complex drama of relationships quite well, highlighting the different issues that can arise (ranging from jealousy to misunderstandings) that plague adolescence.  And Charlotte is a very sympathetic character -- hardly perfect, but reasonably clear-headed.  The book shines when we're in her head trying to figure out what makes boys act the way they do.  The book gets slightly weaker when we're amidst Charlotte's family (it's a bit much to expect this book to juggle family conflicts as well) and scenes with Charlotte's estranged mother seem largely disposable. Those are minor quibbles though, as overall this is a magnificent achievement.
Posted by Paul at 5:14 PM

Paul, thanks for the awesomely thoughtful review! I'm always especially grateful when smart guys talk about my books in smart ways.

Thanks for such a smart review! It means even more to me when guys say intelligent, thoughtful things about my books!