Every Day, by David Levithan 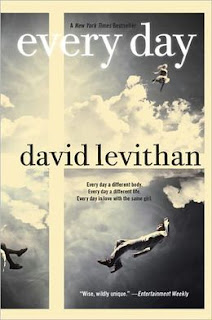 Imagine a life where every day of your life you were a different person.  Some days a boy, some days a girl -- large, small, popular, outcast, gay, straight, transgendered, asexual.  You change so often that you don't even know who you are...yet you do because you remember who you were before.  It could be terrifying or lonely, but to survive it, you must become very self-aware, because (ironically) you lack a unique physical body.

It's hard enough to get by with the confusion of changing every day, but what happens when you fall in love?  How can you maintain a relationship when every day you change?

It's a fascinating concept that allows Levithan to explore (at first subtly and later - when he grows bored with subtle - with a sledgehammer) the concept of identity.  The romance nicely complicates things, but even without the issues of an interpersonal relationship, the book raises many interesting questions about the importance we place on appearance in defining who we are.  Thus, one of the most fascinating parts of the book is the beginning of each day, as our hero wakes up in a new body and we share his/her first impressions.  That initial first paragraph neatly sums up how the rest of the day will go.

Levithan the writer doesn't usually do much for me.  The writing is fine, but I don't like being preached to.  He's created some of the best LGBT literature, but he can get didactic (and even bigoted) at times.  I found particularly disturbing the chapter about the day as an overweight kid.  The character's unconcealed distaste mostly shows that Levithan himself believes that physical appearance matters as much as his hero says that it shouldn't.
Posted by Paul at 8:01 PM