My Life in Black and White, by Natasha Friend 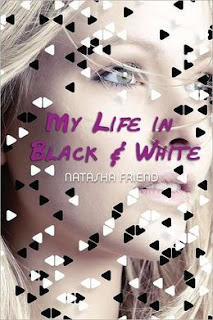 As long as Lexi can remember, she's defined herself through her beauty (this isn't ego, but simply what she has absorbed from others who always commented upon her appearance).  So, when she is permanently disfigured in a car accident, she has no idea of how to cope with the change.  Who is she in a world where she is no longer seen as perfect?  Coming back from the trauma and rebuilding her life will be a big challenge.

The situation is complicated by other changes in her life.  Right before the accident, she was betrayed by her boyfriend and her best friend, which puts her in a bind: just when she needs the support of the people who care for her, she's lost two people she trusted.

While the basic outline of the story would seem prone to melodrama and hysterics, Friend keeps the whole thing level-headed.  By the end, most everything works out, but the solutions are plausible (conflicts stay realistically unresolved, but people move on). The story is well-paced and, aside from a few unforeshadowed plot twists which seemed largely engineered to keep things moving, the plot is logical.  Moreover, the characters are believable and generally likable.  By the end, even the more evil folks have been redeemed and explained.  And I found Lexi's growth away from her obsession with external appearances, while familiar, to be treated in a fresh manner.
Posted by Paul at 3:10 PM