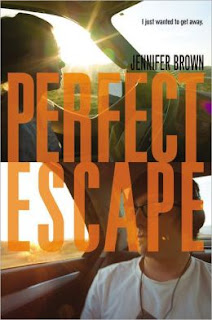 The return home of Kendra's brother from the hospital ought to be a happy moment, but for her it's a source of stress.  Grayson suffers from OCD and his rituals drive her crazy, let alone his full-scale freak-outs when things get really bad.  She loves him, but Kendra resents the way that everything in their family revolves around Grayson's illness.  But moreover, Kendra doesn't need anything more to stress her out right now:  her efforts to maintain a perfect world for herself are coming brilliantly unhinged.  Now, on the verge of being suspended from school, she has a freak out of her own and kidnaps her brother on a road trip to California.  It's a crazy trip that only a perfectionist and her anxious compulsive brother could have.

It's Rain Man for the YA crowd, but with more pathos and grit.  As a story, it's fairly typical road trip stuff (some misadventures, the mandatory side trip, and a wind-down at the end), but the characters make it come alive. I found Kendra to be a bit of a pill -- the idea that she ever thought the idea of fleeing across the country was a good one defies belief, so that when she later on comes to "realize" her mistake, I cringed.  But beyond the sheer implausibility of her character, I liked the rest of it.  Grayson is an interesting character by himself (far more self-aware and assertive than we usually presume of the mentally-ill) and the rapport that he has with his sister is authentic and enticing.
Posted by Paul at 7:38 PM