Revenge of the Girl with the Great Personality, by Elizabeth Eulberg 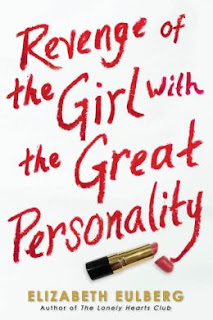 Lexi (this seems to be a popular name these days!) has lots of great friends, but she's not the type of girl to get the guy.  Boys think she's got a "great personality," which is just a nice way to say that you're ugly, Lexi reasons.  She has friends who are guys but they want to talk with her about the girls they really like.  All that changes after a friend convinces her to dress up fancy, put on some makeup, and pretend to be one of the Beautiful People.  Suddenly, people are noticing, including the guy that Lexi has dreamed about.

Meanwhile, back at home, Lexi is trying to survive her younger sister's kiddie beauty pageants, which are breaking up the family and literally bankrupting them.  Lexi's mother is obsessed with participating and Lexi's sister Mackenzie is a total brat, sucked in by all of the attention.  None of which is helped by the realization that Mom obviously values Mackenzie's talents more than Lexi's.

The story has great potential as a examination of perceptions of beauty, but is undermined by the voice of Lexi.  Eulberg gets awfully preachy and puts some pretty mature diatribes into the mouth of her heroine.  It isn't that what Lexi is saying isn't good advice or that a sixteen year-old isn't capable of such logic, but it is implausible (and frankly not very interesting) to have a young woman with greater wisdom on human relationships than most adults possess.  Lexi is far too perfect (with amazing self-determination and objective thinking skills) to really develop into an interesting character.  She's strong, but way too perfect.

I also found the two story lines (Lexi's relationship with her peers and the situation at home) to be distracting.  The two stories never coalesce and so I impatiently waiting to get back to the one I cared the most about (which, for me, was the home story).
Posted by Paul at 3:54 PM