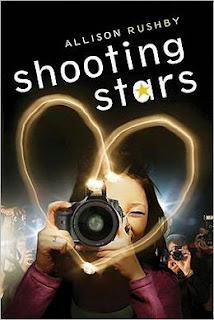 Jo is a professional photographer and, at 16, the youngest paparazzo on the circuit. Her age and diminutive size makes her an expert at getting into places (and getting the shots) that no one else can.  Still, even she is surprised when she is offered a big contract to sneak into a treatment facility for troubled teens and land some snapshots of heartthrob Ned Hartnett (a guy that Jo herself has serious hots for).  At first, she thinks her reluctance to take the pictures is caused by an ethical dilemma, but she comes to realize that the cause of her anxiety is much more complex.

The story is a bit silly, with whole bunches of improbabilities and illogical plot twists.  Who would really give a teen the type of money (and responsibility) described here?  How would you sneak in to an exclusive mental facility for teenagers as a patient?  My own personal favorite -- given what I do for a living -- is the kids' alleged red-eye flight westward from Logan to LAX!

You know you're in trouble when most of the reviews for this book exclaim about how "cute" it is.  Let's just say that the plot wasn't really meant to make sense.  Nor, for that matter, were the characters.  Jo is an OK heroine.  Her ethical quandary seems a bit exaggerated (given her chosen profession) and is repeated so often that it grows tiresome, but she's fun when she's on the hunt.  And that sums up a lot of the characters -- there's not much depth and when they start baring their souls, I found it hard to really care.  They certainly couldn't be taken seriously.
Posted by Paul at 3:43 PM