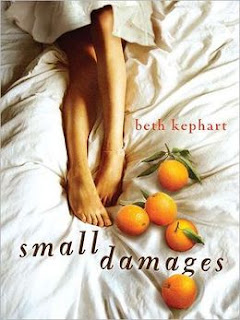 When Kenzie finds she is pregnant, her mother immediately assumes that they will simply "fix the problem." Her boyfriend is not much better:  he's heading to Yale in the Fall and can't be bothered with a child.  And neither he nor her mother can understand why Kenzie wants to carry the baby to term.  But upon learning Kenzie's intent, her mother decides that the best thing to do is to send Kenzie away to Spain, where Kenzie can have the baby and give it up for adoption to some old friends of Mom's.

And so, Kenzie finds herself in a small town in sun-drenched Spain, working as an assistant to a cook named Estela -- a woman with a past and regrets of her own.  And, as the baby comes to term, Kenzie deals with her anger at being sent away and with her search for the meaning of "family."

It's a very lyrical book with beautiful language and is simultaneously surprisingly brisk to read.  Readers who enjoy poetry and verse books will delight in Kephart's prose.  That said, the style is also opaque and hard to follow (and, at times, a bit too precious).  I personally would have preferred a clearer and more direct style (it can get exhausting to read pretty prose!).  And while the story certainly evoked a mood, it all seemed a bit dull.
Posted by Paul at 4:14 PM