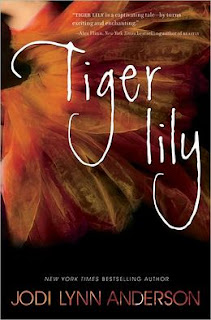 Fifteen year-old Tiger Lily is betrothed to oafish Giant, but longs to be in the woods of Neverland, hanging out with fun-loving Peter and his gang of Lost Boys.  Her sneaking out threatens her standing in the village, but she brazenly refuses to care and fantasizes about living with Peter forever.  In spite of this, Tiger Lily has never trusted anyone, and even with Peter, she stays restless and aloof, confident that she can have it both ways.  It is thus a rude surprise when dainty submissive Wendy arrives from England.  She quickly captures Peter's heart (and the loyalties of the Lost Boys as well), leaving a bitter and jealous Tiger Lily in the lurch.

For anyone raised on Walt Disney's Peter Pan, the story here will be quite a rude shock.  All the characters make an appearance (Captain Hook, the other pirates, and even the crocodiles are there), but everything is slightly different and a bit darker.  This version, narrated by Tinkerbell, is far less about Peter than the troubled adolescent Tiger Lily.  Gone is the joyous "I won't grow up" of the original and in its place is a world where another girl's withering stare is the deadliest of weapons.  The focus has been shifted to a tale of betrayed friendships and vengeance.

It's a very imaginative piece and really quite unlike Anderson's previous novels.  It's certainly one of the more unique retellings that I've read in a while.  However, it is not an easy read.  There are a lot of characters to track, the narration itself is opaque, and overall it is hard to get into.  By the end, I found myself enjoying it, but it took a lot of work.
Posted by Paul at 4:01 PM