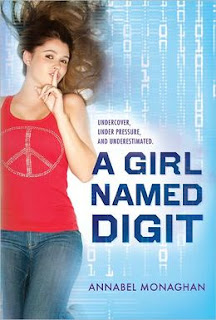 Farrah may be stuck with an awful name by her seventies-TV-junkie mother, but it's her brilliance at math that's earned her the much more detested nickname of Digit.  Her talent is amazing, but she'd rather suppress it so she can fit in at school.  That is until she uncovers a secret code being broadcast during her favorite TV teen drama that leads her to a secret terrorist cell operating in the US.  When said nefarious group launches a devastating attack at JFK, Farrah springs into action.  Helped by the irresistibly cute (and conveniently available) FBI agent John, Farrah is jetting across the country, hiding out from the bad guys, and launching a plan to bring them down (that will involve her little brother, her parents, and one of the most popular girls at school).  All she needs to do is stay alive and survive a week's worth of leg hair growth!

For folks who are a bit older than the target audience, the storyline is reminiscent of True Lies (remember Arnold and Jamie Lee?) but a bit more over-the-top.  It's funny, silly, and ridiculous as hell, but if you can manage to not take it seriously, this is a pretty amusing read.  The romance is awkwardly adolescent but tongue in cheek (how else to describe John and Farrah's parents meeting while plotting to entrap an FBI mole)?  It's nice that Farrah is math smart and bright, but I would have preferred if she wasn't as boy crazed (and if she had avoided the whole Bella Swan mope thing at the end).  Still, I admire the genre mashing going on here.
Posted by Paul at 7:35 PM