Getting Over Garrett Delaney, by Abby McDonald 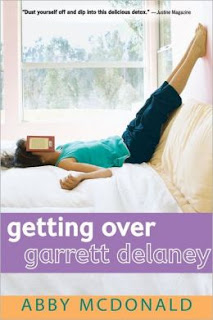 When Sadie fails to get accepted to a special writer's camp for the summer, it ruins her plans.  Not only that, but it means six weeks of separation from her best friend (and major crush) Garrett.   It's just her luck, anyway, as she's been just as much a failure at getting Garrett to notice her these past two years.

But as the reader quickly learns, Sadie's crush on Garrett isn't harmless -- in fact, it's stalker-level obsessive.  She virtually lives for any hint that he might like her, carefully crafting her clothes, likes and dislikes, and mannerisms to be as appealing to him as possible.  And when her situation comes crashing down, her friend Kayla and the co-workers at the coffee shop decide to stage an intervention and convince Sadie to embark on a twelve-step program to move on with her life.

What emerges is a story, initially humorous, but ultimately quite touching, about the way that people (and young women, most of all) go from wanting to be pleasing to others to losing themselves entirely to a partner.  As Sadie herself muses towards the end:  we all want to be loved, but how do you do that while maintaining a sense of self?  It certainly helps when the guy you like isn't a selfish prick (as Garrett is), but McDonald is more subtle and goes on to show that, even with the men who aren't creeps, it's very easy to fall into the trap of forgetting what is important to yourself in order to "win" someone's heart.  The book tackles all this without becoming overly preachy.  While it is certainly a story with a message, McDonald achieves a suitable balance of fun and function that made the book entertaining and simultaneously valuable.
Posted by Paul at 1:42 PM