The Look, by Sophia Bennett 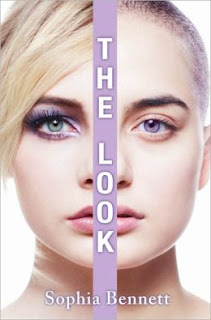 When a talent scout accosts Ted and her sister on a London street and tells her that she could have an amazing future in modeling, Ted first presumes that he means her sister.  And then, when he clarifies who he's admiring, she suspects that he is some sort of scam artist.  But the guy is legit and serious.  And Ted reluctantly embarks on an attempt at a fashion career.

To complicate matters, Ted's sister has just been diagnosed with cancer.  Ted finds herself overextended between pursuing the new career (both for herself and for her sister who uses Ted's adventures as a distraction) and taking care of her family.

The cancer angle is something different, but the being-swept-away-by-fame story has been done to death (let alone the whole ugly-duckling-finds-out-she-is-actually-amazing-swan-after-a-make-over plot).  Consider, Melissa Walker's Violet on the Runway as a more recent example.  It is really not giving much away to say that Ted will get swept away by the excitement and then belatedly come to realize what is most important in the end.  After all, if she didn't come back from the brink, we'd all hate her!

What makes the story stand out is the character of Ted herself -- assertive and sure of herself, she knows what she's getting into and never quite loses herself as much as the reader expects her to.  Standing up for herself, she's definitely a fish out of water in the fashion business (which is otherwise portrayed in stereotypes).  Ted thus makes an appealing guide to this alien world -- the type of brash young woman that young women reading fashion magazines and this novel might like to imagine themselves as resembling.  Far more than a look, then, Ted is an attitude.


[Disclosure:  my copy of this book came unsolicited from Scholastic.  I received no compensation for this review and I'm donating my copy to the Middleton Public Library book sale after I'm done with it.]
Posted by Paul at 9:37 AM