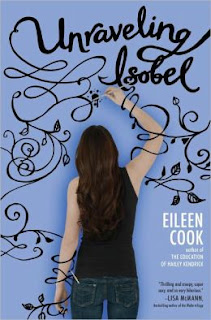 Isobel isn't thrilled that her Mom is moving them from Seattle to a remote island where, as Isobel puts it, "there are more endangered birds than people." Mom's gotten remarried and it's all a bit creepy:  Dick the step dad just lost his previous wife to an unfortunate boating accident a few months ago under somewhat mysterious and unresolved circumstances.  Even the place is unsettling.  Dick and his son Nate live in a huge "estate" on the island that is rumored by the island's inhabitants to be haunted and cursed.  At first, Isobel doesn't worry about stuff like that.  But then she starts to see strange things and begins to wonder if someone (or something) is trying to tip her off?  Or maybe she's just going crazy (like her biological father did)?

And then, just when you've settled in to reading a good supernatural thriller, we have Nate, the stepbrother.  He's hot and haunts her in an entirely different way.  It's a situation that could get very complicated as the most popular girl at school vies for his affections as well, and she's more than a little jealous of Isobel's access.

Fun!  It gets a bit complicated and one could take Cook to task to trying to bring in too much (and leaving some threads - like Isobel's father - underdeveloped), but this is a great mixture of suspenseful and creepy stuff with a dash of high school angst thrown in.   Even if the story can be chaotic and implausible at points, I enjoyed the mix of humor, action, and romance.

The only major downer was the book's lame cover, which I noticed that they jettisoned for the paperback edition.
Posted by Paul at 9:59 AM