When the Butterflies Came, by Kimberley Griffiths Little 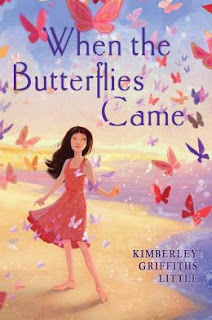 On the day of her grandmother's funeral, a beautiful butterfly visits Tara.  It's a small comfort in a world that has grown pretty dark:  Daddy's long gone, Mamma has suddenly disappeared, Tara's older sister Riley won't talk with her, and everything else seems to be falling apart.  But then Tara starts finding letters from her grandmother that lead her on a hunt for clues.  The hunt becomes serious as Tara learns that her grandmother was on the verge of an important discovery involving special butterflies.  Grandmother's death may in fact have been planned and the murderer may have been someone she trusted!  Each letter leads Tara closer to the truth as she goes first to her grandmother's house in the bayou and then half-way across the Pacific Ocean to the island of Chuuk in the midst of Micronesia.  Tara (with reluctant help from Riley) must figure out what happened and save her grandmother's secret work and the butterflies!

While the story eventually comes together in the end, my overall impression of the book was that it was rough and in need of further editing.  The plot meanders, with subplots that don't really move the story forward.  Much of this static is intended to keep the pace up, but it was ultimately distracting.  At the same time, major developments are poorly foreshadowed and instead introduced roughly into the story.  And finally, key elements (like the butterflies, for example) are left underdeveloped.  As I said, it wraps up alright in the end, but it's a narrative mess!

[Note:  The book is being released on April 1st.  I read an ARC supplied by the publisher, but received no compensation for my review.]
Posted by Paul at 12:17 PM