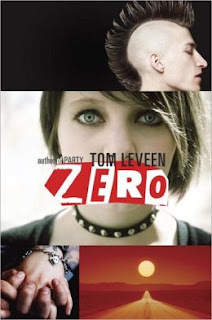 Amanda's nickname Zero pretty much sums up how she sees herself.  She's no longer talking with her best friend.  Her parents are always fighting.  And her dream of attending art school in Chicago has been ruined when she is accepted, but denied a scholarship.  In despair, she drowns her sorrow in her painting, her love for Salvador Dali's artwork, and reciting the lyrics of songs written by local punk bands.

Enter Mike, the drummer of an up-and-coming local band.  She finds him at a concert and works up the nerve to talk to him.  Much to her surprise, he likes her back.  But the bigger surprise is how he ends up turning her life around, challenging her to change her attitude and start reaching for her dreams.

The setting (suburban Phoenix) is a bit hard to relate to, but I grew to really like the characters.  Leveen has great voices for his people that had authenticity and appeal.  Zero makes more than a few lousy choices and she can whine up a storm, but her fierce independence made her sympathetic even when she wasn't always likable.  Mike, in contrast seemed too perfect to be real, but that really was his purpose, so I'll cut that one some slack.  The overall story is a meaningful and quirky take on the process of learning self-respect.
Posted by Paul at 10:21 AM