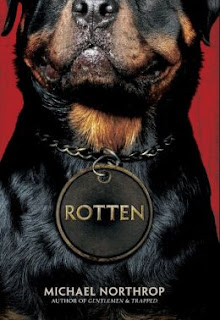 When Jimmer returns home at the end of the summer, his buddies are desperate to find out where he's been.  He claims he was at his Aunt's all summer, but they suspect it was juvie he was "visiting." Jimmer himself isn't saying and in fact is trying to avoid the subject, just as he's trying to avoid his ex-girlfriend and lay low.  Matters are complicated by a new addition to the household.  While he was away, Mom has adopted a Rottweiler named Johnny.  Boy and dog quickly bond, but will they be able to stick together?  And will the people around them forgive their pasts and their reputations?

It's a boy book and a dog book, which means that there are at least two reasons why I normally wouldn't touch it.  But it came as an unsolicited ARC and I was short on reading material, so I decided to expand my repertoire and give it a try.  The story isn't big on character development and the boys are generally pretty limited (and dumb), but the story grows on you and you do end up caring for the dog.
Posted by Paul at 7:17 PM