The Girl With Borrowed Wings, by Rinsai Rossetti 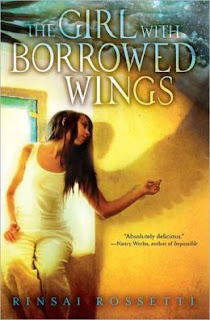 As my ardent followers know, I rarely find a book that I consider perfect, and anytime I do find a four-star book, it is major news.  Instead, I prefer to break my books down, picking away at them, as if I could control them and shape them.  In this way, I am very much like the father of Frenenqer Paje, the heroine of this haunting, amazing, and original novel.

The literal storyline of this book is of a young woman, who has been shaped by her father through constant emotional (and physical) abuse to be the perfect woman -- a dream he developed years before she was born, in a field of sunflowers near Santiago Spain.  Now living in an oasis somewhere in the United Arab Emirates, an adolescent Frenenqer is trying to form a sense of self-identity.

One day, she happens upon a dying cat in a souk and rescues it (against the demands of her father).  The cat turns out to be a shape-shifter and a "free" person, becoming a beautiful boy that Frenenqer names "Sangris." Sangris fulfills a long-held fantasy of Frenenqer's by growing wings and secretly spiriting her away to faraway destinations (both terrestrial and otherworldly).

A romance develops, but in a totally unexpected and surprisingly organic fashion.  This is fitting as Frenenqer is no friend of romance ("He.  Does there have to be a he?  It seems weak and unoriginal doesn't it, for stories told by girls to always have a he?") Frenenqer loves the freedom that Sangris brings her, but recognizes that using Sangris's wings to escape her father's tyranny is hardly liberating.  Rather, it is trading one form of subjugation for another.

Desperate to find love and agency on her own terms, she struggles to navigate between the worlds of her father and of Sangris to find a path that works for her.  It is not an easy path, but the end result is surprisingly authentic.  The book's conclusion definitely raised the temperature of the room a few degrees!

The story operates on so many levels.  As a paranormal romance, it works fine, although a reader might wonder at the harshness of the characters, at the sheer cruelty of the father.  The characters are clear and understandable, their inner conflicts instantly recognizable as the universal struggles of self-understanding and the search for social acceptance.  Frenenqer's conflicts between being a good daughter and being a self-confident young woman are authentic and familiar.  The narrative is beautiful, with numerous quotable passages.

But the novel has so much more going on.  It is the type of story that begs a generation of literature majors to write dull and boring theses about it that quote obscure French literary critics.  It is the book that high school English teachers who abandoned graduate school ABD years ago assign to their honors students in hopes that the kids will get it.  And it's the novel that publicists hope they can figure out a way to explain and sell well enough so that at least a sufficient number of public librarians will purchase it to turn a profit.  Rossetti may never write another book like this (it has too much of her heart displayed in it), but it ought to be sufficient on its own.  Truly, a classic to be!
Posted by Paul at 9:37 PM

I really liked this book, too!