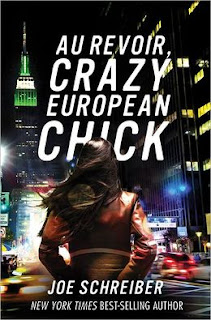 In his senior year, Peter's family decides to host a Lithuanian exchange student named Gobi.  They knew it would be an interesting cultural experience, but they didn't quite count on what they got.  Gobi turns out to be a wallflower in baggy clothes who is painfully shy.  During the nine months she stays with them, she barely communicates, makes no friends, and by the end Peter awkwardly avoids being around her.  So, when Peter's parents decide that Peter should take Gobi to the prom, Peter objects.  But Peter has always been cowed by his parent's demands and soon enough Peter and Gobi are on their way to the Prom.

As they are heading to the Prom, Gobi promises Peter that, before the night is over, he'll understand her a lot better than he does now.  Peter doesn't know how to take that statement or what it means.  But when Gobi pulls out a gun and leads Peter on a nerve-wracking marathon across New York City knocking off bad guys, Peter realizes that his initial perceptions of her have all missed their mark!

Fast and fun, there's nothing like a genre-defying book!  If we're going to search for a mash-up, this is probably Risky Business's Joel meets La Femme Nikita (although I like the review that called it "Nick and Norah's Infinite Hit List").  Despite the over-the-top action, there's a surprising amount of depth to Peter and Gobi and a nice chemistry between them (although Gobi is primarily relegated to Schwarzenegger-ish monotone).  And, like a good action movie, there's humor to drive the story along.  I enjoyed the combination of a coming-of-age story with serious gun play and fast car chases.

And then there's the central conceit of the story: the way that each chapter is introduced with a real-life college application essay question, which is then answered in the chapter itself.  This works surprisingly well (and also reminded me a bit of Risky Business).
Posted by Paul at 3:14 PM