Burn for Burn, by Jenny Han and Siobhan Vivian 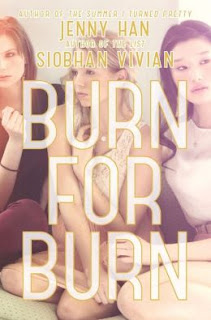 Liliya, Kat, and Mary have all suffered injustices.  In each case, the source of their suffering is caused by the cruelty of a specific person.  And when chance brings the girls together and allows them to compare notes, they discover a mutual desire for revenge.  So, while the girls have nothing in common beyond that wish, they bond nonetheless.  And along the way to realizing their rather twisted dreams, they come to understand each other and become unlikely allies (if not friends).

Team-written novels are usually painful ego-stroking exercises, best left in rough draft at a writers' retreat.  Their sole source of entertainment is watching the authors try to trip each other up (see, for example, anything written with David Levithan).  Thus, it is notable how well this one actually works.  I recognize all the beach town details as Han's milieu and the insights on clique psychology are Vivian's strength, but the writing is stylistically seamless and the reader doesn't trip over abrupt shifts from one author to the other.

The characters are quite interesting (as both Han and Vivian excel at building strong complex young heroines).  These are dark people and it takes quite a bit to make ostensibly mean girls into interesting (and even sympathetic) characters, but the book largely succeeds.  Liliya, torn between her loyalty to her best friend Rennie and simultaneously helping Kat exact revenge against Rennie has particularly complex motivations.  All three girls waver a bit on their convictions as they find that their commitment to striking back is not necessarily iron-clad.

The story itself is less smooth, and this is ultimately what defeats the tale.  In all the effort to collaborate, Han and Vivian can't quite figure out where they want the story to go.  And there are tantalizing subplots (including one that suggests supernatural forces at play) that never get developed.  The ending is particularly wimpy and seemed more like the authors just got tired of the exercise and threw in the towel.

Final Note:  There is absolutely NOTHING in this book that says "trilogy" (aside from the atrocious ending), so the recent announcement that this is part one of the "Burn for Burn Trilogy" is obviously a cynical post-publication marketing ploy.  The story doesn't have enough steam to justify two more books, so I won't hold my breath for the rest of the series.  I wish Han and Vivian would both focus on putting out good books instead of trying to cash in on the trilogy craze!
Posted by Paul at 2:59 PM