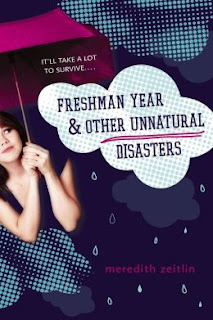 When Kelsey starts ninth grade, she's committed to the idea that this is the year that she is finally going to step out.  She has her eyes on Jordan, a star on the boy's soccer team, and she figures she'll get him to notice her by doing well on the girl's team.  But this plan (and most of her other ones) go astray (sometimes spectacularly) as she struggles through her first year of high school.  Good friends, however, provide support as she learns many life lessons.

It's a readable, but unremarkable story -- basically, a series of familiar tropes ranging from family (mother-daughter conflict, obnoxious younger sister, and clueless father) to peers (disappointing crushes, unexpected knights in shining armor, etc.).  This is not necessarily bad, but it makes the book painfully predictable.  I understand the appeal, but did we really need yet another example of the genre?
Posted by Paul at 2:54 PM