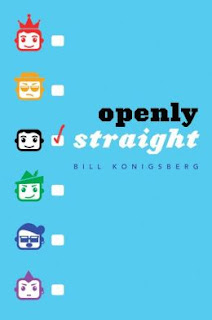 Rafe has been out of the closet for years.  The kids at school in Boulder know about him, his parents are super supportive, and his best friend (a girl named Claire Olivia) totally has his back.  But when Rafe transfers to an all-boys boarding school in New England, he decides he wants to try something different.  Instead of being out and proud, he'll keep his sexuality to himself.  After years of being the "gay" kid at school, Rafe wants to experience being "normal." He's tired of having his sexuality define who he is to others.

At first, the plan works great.  Rafe goes out for sports and becomes "one of the guys" hanging with a group of jocks whom Rafe can't imagine being so close with back home.  But things get complicated as Rafe tries to get Claire Olivia and his parents to understand why he's back in the closet.  And as Rafe's attempts to evade the question of his sexual orientation at his new school become white lies and the white lies become outright deception, Rafe discovers that he's in a trap (of his own making).

Surprisingly interesting and effective.  Decent gay literature is hard to come by and a book that goes far beyond the whole coming-out scenario to explore what being "gay" really means when you are a teen are rarer.  Konigsberg writes well with a good ear for boys.  The characters are strong and interesting.  And while placing the story at an all-boys boarding school won't win any prizes for originality, the story itself is fresh.

[Disclosure:  I received an advance copy of this book from the publisher, but no other compensation.  I am donating my copy to the Middleton Public Library after I finish with it]
Posted by Paul at 6:52 PM