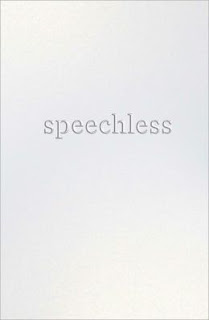 Chelsea likes to have the dirt on folks and she loves good gossip.  That is, until she catches Noah and another guy in flagrante delicto in a bedroom at a party. The news is so juicy that, without even thinking, she blabs about the whole thing to everyone she sees.  But what seems like so much fun takes a sinister turn when Noah is beaten into a coma by two boys that Chelsea told.  Wracked by guilt, she turns them in to the police and her troubles begin.

Labeled a snitch, Chelsea is shunned by her classmates.  She decides that the root of her troubles lie in her inability to keep her mouth shut, so she takes a "vow of silence" and refuses to speak aloud.  Without the ability to speak (and defend herself), Chelsea begins to notice things about herself and her peers that she never did before.  And in that silence, she gains understanding, new friends, and an opportunity at a new life.

As a Quaker, I naturally love a story about the power of silence.  For a normal teenager, it must seem like a horrendous ordeal, but I think Chelsea shows us quite well what it can do.  In fairness, however, she is actually hardly ever silent since she is the narrator of the story.  Instead, we have to imagine what it must be like for her friends and family who don't benefit from her inner dialogue as we do.

The story itself is not all that remarkable.  The plot is predictable (self-centered girl learns to care about others and conquers her enemies with kindness), but it is of course a winner.  You can't not root for Chelsea as the bad guys keep getting in shots -- you want revenge just as much as she does.  So, you flip the pages in anticipation of the payback.  Other parts are less compelling.  The romance is warm, but nothing terribly exciting (which is surprising for a Teen Harlequin novel).  The repartee at the workplace (a diner) is meant to be interesting but also feels a bit like we're going through the motions.  Even the bullies and the clueless teachers seem lackluster.   The energy simply isn't there.  Readable, but not surprising.
Posted by Paul at 8:39 PM