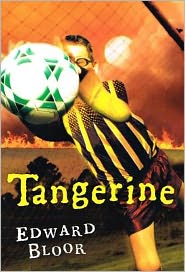 Paul Fisher may be legally blind, but he notices a lot of things around him. He sees the way that the ospreys steal the koi out of the artificial lakes (not an alligator or a human thief as the adults suppose).  He sees the way that his father obsesses over older brother Erik's football successes (while ignoring Paul's soccer prowess).  He sees the tensions between the rich kids in Lake Windsor Downs and the farmers' children in Tangerine.  Yet, he doesn't seem to remember how he lost his vision (he's told it was due to staring at a solar eclipse, but he vaguely recalls a different series of events).

And with this knowledge, Paul is thrown by a series of events onto the soccer team at Tangerine middle school, a group of kids so unlike Paul that they have a lesson or two to teach him - about the game and his life.  The result is a thrilling sports novel and an enlightening story about loyalty and honesty.  Some fun facts about citrus farming are an added bonus.

For a book that is definitely targeted at boys, this is an odd pick for me.  But I've always said that what draws me to a good read is the characters and the message.  Bloor has written a fascinating book that combines an appealing story about awkward friendship with some great social commentary.  Paul is a great character, with some geekiness and yet a clear sense of social justice and the strength to stand up for the right thing (even when the adults around him won't do so).  These are the ingredients for building a classic that his endured for multiple reprintings.  It's amazing to think that this was Bloor's first novel.
Posted by Paul at 9:40 PM