This Is Not A Test, by Courtney Summers 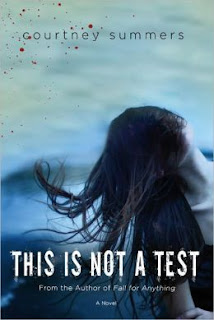 Six teens get trapped at their high school when the Zombie Apocalypse starts.  Even before the kids have managed to secure the entrances and fortify their perimeter, they are sniping at each other.  Partially, it's baggage from the past, but several key events (revealed slowly over the course of the book) have taken place in the week since the world started going crazy and before the story proper begins.  The result is a story more like Lord of the Flies than The Evil Dead.

The central character, Sloane, is initially the most unstable.  She's angry at her sister for running away from their abusive father six months before.  Left on her own to face a hellish homelife, Sloane grew suicidal (even before people around her started getting killed).  It is ironic then that, as the hopelessness of the situation grows, it is Sloane who develops survival instincts.

It's a decent book that suffers from trying to do too much.  As a coming-of-age story about domestic abuse, sibling separation, and even interpersonal relations in the hallways of Cortege High, the novel works.  Even as a zombie adventure story, it works pretty well (plenty of adventure and dramatic events).  But combined together, the pace fluctuates too much.  The dialogue seems whiny and drags on too long.  The zombie action feels like a story from an entirely separate book.  It is jarring mash-up.
Posted by Paul at 2:32 PM