Fall From Grace, by Charles Benoit 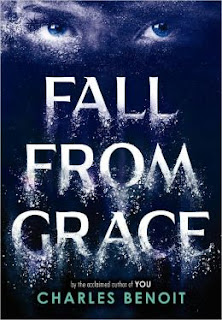 Sawyer spends much of his time being the subject of other people's plans.  His parents know where he'll go to college and what he'll major in.  His girlfriend has figured out his social (and even his romantic!) calendar for both of them.  And Sawyer just inertly follows the plans.  It's not that he lacks in thoughts and ideas of his own, but he's just learned that it is too difficult to fight the flow.  He's bored and frustrated, but has no idea how to break free and follow his own plans.

Enter Grace, a girl from a neighboring high school.  She's got plans as well, but hers are decidedly different from any that Sawyer has seen before.  She likes to steal things.  The first time they meet, at a Model UN conference, she talks him into stealing documents from the other teams.  The novelty and the taboo-breaking are intoxicating to Sawyer and he is hooked.  From there, her plans move on to much bigger things.  Sawyer loves the excitement and the idea of doing something dangerous, and being someone that his parents and girlfriend would never approve of.  But these little rebellions come with a cost.

The really interesting question, and one which I wish the author has had Sawyer explore is whether he's really breaking free or just finding another person's plans to fall behind?  Unfortunately, it isn't really a question that the book attempts to answer.  Instead, this is largely an action story -- and a slow one at that, as sawyer ends up pretty much where he started.  The drama (tensions with parents, with girlfriend, and even with Grace) are largely tossed out in the end.  It's entertaining, but not very edifying.
Posted by Paul at 6:12 PM