The Princesses of Iowa, by M. Molly Backes

[Note:  I've been on the road for the past two weeks, so haven't had an opportunity to post my reviews, but I have been reading so I'll try to catch up here over the next couple of days] 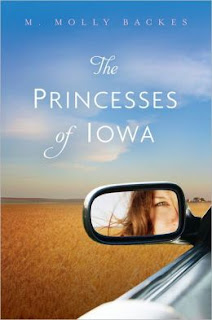 After Paige is involved in a car accident, her image-conscious mother decides to ship her off to Paris until things calm down, in order to preserve Paige's shot at being elected Homecoming Queen.  This leaves behind her best friend Lydia injured and other friend Nikki grief-stricken, without any explanation.  Returning home several months later, Paige finds her friends distant and changed, and a general sense that she will not be allowed to mend fences with them.  Her boyfriend now devotes all his attention to Lydia who (as everyone reminds Paige) is "going through a difficult time." What about Paige?  Paris wasn't exactly a joy ride and she misses her friends!  Senior year is a turning out a far cry from the dreams that the three girls had when they were growing up.

To the rescue comes a creative writing class that Paige is taking at school.  Taught by a young grad student, she is encouraged to channel her anger and frustration and "use it" to write.  In the process, she discovers new friends and explores new options, opening herself to the idea that the world may mean a lot more than being a "princess." Paige's mother, still obsessed with the old dream, continues to push Paige in a direction that she is no longer certain she wants to go.

A fairly lengthy book, which felt artificially drawn out by dialogues that never quite finish.  When you can pinpoint a hundred-odd pages that could have been eliminated by simply completing a sentence, you know the story's in trouble.  Tighter would have been better.  Or maybe it's simply the characters that drove me nuts.  Paige didn't really show much sign of being nice until about page 350.  That's a long time to hold out hope for her redemption!  And her peers were far worse.  Basically, these weren't people I wanted to get to know (in some cases, they were people I actively wanted to run away from!).  So, a story that dragged on and characters that didn't appeal basically defeated some strong writing -- in sum, a beautifully depicted world that I didn't want to get to know.
Posted by Paul at 12:59 PM