The Secret Sisterhood of Heartbreakers, by Lynn Weingarten 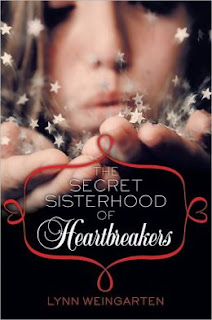 On the first day of school, Lucy pledges herself to her boyfriend Alex whom she hasn't seen all summer.  But it doesn't go well.  Instead of bringing them together, he announces that he wants to break up.  Heartbroken, Lucy doesn't know what to do.  But, while grieving, she is approached by a girl with an unusual proposition:  learn special magic that will heal her broken heart by joining a secret sisterhood of conjurers.  All she has to do is get another boy to fall in love with her in the next seven days and then dump him.  His tears will form the core ingredient in a potion that will fix everything!

It's an odd premise and a story that doesn't really seem to know what its purpose is.  Is it trying to be a fantasy book about spells and supernatural powers?  Is it a realistic tale about the uselessness of fantasy and the greater importance of developing self-esteem?  The book could have worked either way (although I'll admit that I was rooting for the latter direction) but instead Weingarten carves out an uneasy compromise between being a story about magic with occasional intercessions from the real world and the reality checks of maturity.  The problem is that this muddies the message.  Is it more important to love yourself or to develop spells and potions with which to control boys and make them love you?  The book would have us believe that both are equally important, which seems like a pretty useless solution. The characters themselves were not very important either, since one is never really sure what each person's motives are (i.e., how much comes from within and how much is a response to all the charms and magic floating around).  In sum, it's a story that seems too sober to be fantasy and too fantastical to be a coming-of-age romance.
Posted by Paul at 9:02 PM