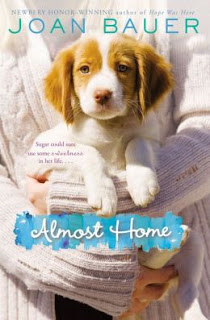 When Sugar and her mother lose their home and end up on the streets, it would be easy to feel down and lose hope, but Sugar is as sweet as her name.  Whenever things take a turn for the worse, she still finds it in her heart to thank the people who help her and even locates a kind word for the good parts of the people who don't.  After all, her mother, as helpless as she may be, taught her to always say "thank you!"

Meanwhile, her late grandfather and his book of life guidance and wisdom has taught Sugar to stand up for herself and her family.  As a result, Sugar is one strong-minded, resourceful, and determined twelve year-old.  Through some encouragement from her English teacher, Sugar articulates her feelings about her family and the hard times that have befallen them.  And she makes some friends (most notably a puppy that actually purrs!) and does a decent job of keeping things together even when the adults around her can't manage to do so.

Joan Bauer usually has a pretty specific formula:  create a vivid character with a particular skill (waitressing, pumpkin growing, shoe selling, pool playing, etc.), set a bunch of obstacles up, and let the protagonist overcome them and learn a little self-confidence along the way.  In some ways, this book follows that heroic script, but Sugar is a much more complicated character (in spite of being five-six years younger than the usual Bauer heroine and a bit less articulate).  Mostly, she reminded me of a younger Jody from Letting Go of Bobby James in her quirky spiritedness.  She certainly doesn't live in the comfortable middle class environment that pervades in most of Bauer's stories.  The stakes are a bit higher and danger a little closer, and the dysfunctional parent is a bit of a twist (in most Bauer novels, the parents are pretty inconsequential, but not nearly as self-destructive as Sugar's Mom).  This makes the story darker, but ultimately deeper and more meaningful.  Overall, it's a winner, although less easily digestible than Hope Was Here or Rules for the Road.
Posted by Paul at 5:59 PM