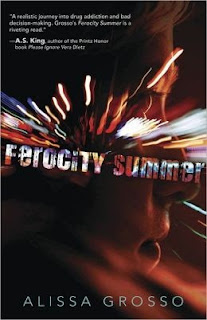 In the summer between their junior and senior years, Scilla and her best friend Willow are aimlessly trying to escape their lives. There is ample reason -- they have been implicated in an accidental homicide.  But rather than lay low as their case goes to trial, they indulge in excessive alcohol and drug consumption to mask their feelings of guilt.  The book's title meanwhile is a reference to a new drug called Ferocity that is making the rounds on the party scene.  It's a nasty thing, leaving about half of its users as permanent vegetables.  Still, given the cluelessness of the kids in this story, they hardly need any help!

I'm a bit conflicted about the book.  The shallow characters and their self-centric moaning and groaning gets old pretty quick, and this is not a group with whom I found much to empathize.  Yes, eventually, redemption will be achieved, but by the time it came about, I simply didn't care.  It simply isn't interesting to read about stupid people screwing up their lives.

On the other hand, Grosso has created an interesting (and rather subtly dystopian) world -- just slightly different from our own -- to use as a setting.  A great example of this is the Ferocity drug which mirrors (but also exaggerates) the drugs of today.  Overall, the setting is realistic, but with twists that make for an interesting read.  This, in spite of my distaste for the characters!
Posted by Paul at 6:31 PM