Love and Other Perishable Items, by Laura Buzo 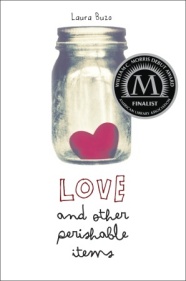 It's an unusual story about lovers who aren't, not least of all because he's 22 and she's only 15.

Amelia struggles with understanding what her parents see in each other and why her mother puts up with Dad's chauvinistic behavior.  Everywhere she looks and every thing she reads reinforces her belief that things are just plain wrong and that love is all messed up!  But most confusing of all for her is her unrequited crush on Chris, a co-worker at the grocery store where they both mind registers.

Chris is the harder egg to crack.  He's disillusion about love, his career, and his future.  He's bitter over the recent abandonment by the "perfect" girl he's experienced, school is no longer meaningful, and he's unable to make a living or stick to a plan.  More than anything, he's lonely, and tries to assuage those feelings by chasing after the women at work (paying little mind to Amelia, since she's just a kid!).

Through alternating diary entries, Amelia and Chris tell their stories about trying to figure out what is happening in their lives.  Their inability to find each other is both tragic and natural, given the circumstances, and one mostly comes away with a deep sense that they are both in very different places, but are so lost in themselves that they cannot recognize it.  The story leaves things unresolved, but this isn't really a relationship that any one would want to see consummated anyway!

There is no small creep factor in the age difference between the protagonists.  To Buzo's credit, the story never turns it into an issue.  What works less well is the general lack of a story in the first place.  There is a lot of dialogue in the book, but not much actually happens.  Drunken parties provide most of the decent action, but it doesn't amount to much and we have to spend a lot of time enduring sober banter to get to these pivotal moments.

There's also the question of intended audience.  As a depiction of what an angsty crushing fifteen year-old girl and a driftless 22 year-old young man are like, it is spot on, but what is the point and who would really care about them?  Certainly, a teen would hardly understand what Chris is feeling and an older person would cringe at reading Amelia's naivete.
Posted by Paul at 8:10 PM