Meant To Be, by Lauren Merrill 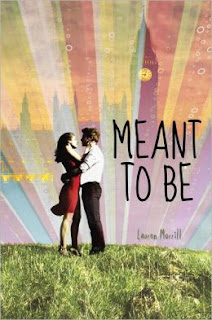 Julia is a hyper-organized, straight-A student who's always followed the rules.  She's got a clear sense of how things are supposed to happen and that includes the certainty that Mark is meant to be her partner for life (even if he doesn't know it yet!).

But while on a school trip to London, Julia is paired up with class clown Jason -- a boy whose chaotic lack of respect for the rules drives her nuts.  But for every obnoxious act he does that annoys her, she finds herself drawn to him...and, well, you know the rest and how it will all turn out, right?

In many ways, this was the perfect book to accompany my own trip to London.  Between the observations about travel and all the name dropping of people and places, there was plenty with which to compare.  What worked less well for me was the story itself.  There isn't much fun in watching a fairly adjusted young woman throw away good sense for bad taste in guys, and make one bad choice after another.  And, as depicted, there isn't much to recommend Jason.  He's vain and conceited and immature to boot!  And, while the appeal of the "bad boy" is obvious, it doesn't make sense for someone as allegedly mature as Julia to fall for him.  This ultimately makes the story pretty dumb.  And, even with the fairly heavy Shakespearean allusions that Merrill is pulling out, the story lacks originality and appeal.
Posted by Paul at 7:29 PM