Since You Asked, by Maurene Goo 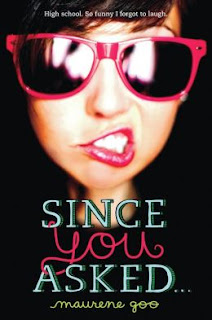 Bored sophomore Holly thinks she's being cute when she re-writes a column for the school newspaper that she's copyediting.  But little did she expect when she was turning the dry boring piece she was correcting into a ripping expose on the school that it would see the light of day!  When it accidentally gets published, she's sure that she's dead:  if not by the hands of her angry peers, than by the crazed paws of her mother.  Instead, her article is an instant sensation.  She is given a column of her own where she delights in lighting into her fellow students, while simultaneously lambasting the pitfalls of being a Korean-American.

Holly's wise cracks and cynicism are a currently-popular form of humor, so this book should sail with its target audience, but it frankly wears thin.  Yes, I get that she's angry and frustrated, but I don't get much out of reading 200+ pages of the snide remarks.  And the Korean angle, while not overplayed, has been gloriously done before (Gilmore Girls, anyone?).  The resulting book is sassy, but ultimately insubstantial.

Never mind that the cover is the hands down winner for Least Appealing Image of the year!  But hey, who am I to make snide wise-ass remarks?!
Posted by Paul at 8:16 PM