Struck by Lightning, by Chris Colter 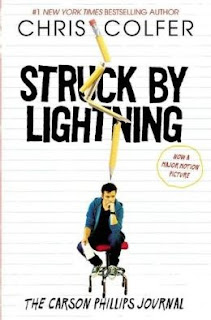 Carson Phillips could be described as "majorly cynical" without fear of overstatement.  He invariably has a biting comment to share with his peers about every behavior he observes around him.  He is the quintessential angry young man.  Predictably, this does not endear him to the rest of the student body (not that he really cares!).

His primary ambition is to get accepted at Northwestern University, major in journalism, and end up some day as editor of The New Yorker.  And while it is hard to find anyone to support his dreams (or even understand them), he holds out hope that it won't matter in the end -- he will soar above them all.   However,  when he discovers that his chances of getting accepted at Northwestern will be greatly improved by putting out a literary magazine, he realizes that he need some help to pull it off and he has to find a way to solicit the help of the people he has so thoroughly alienated.

I found this a particularly hard slog.  While Carson's biting social commentary is supposed to be amusing, it's way too cruel and mean spirited.  Perhaps the targets of his disdain deserve what they receive, but without any effort from Colter to demonstrate their worthiness, Carson's abuse just comes across as nasty.  As a result, I really grew to hate Carson's bullying.  This is only partly mediated by the times when Carson himself realizes that he's overstepped (more so, because the realization never seems to effect a change in his behavior!).  Colter himself seems to have a mean streak of his own in this book, leading up to a particularly bleak and unsatisfying conclusion, which turns the book's title into a sick joke.
Posted by Paul at 8:10 PM