The Boy on the Bridge, by Natalie Standiford 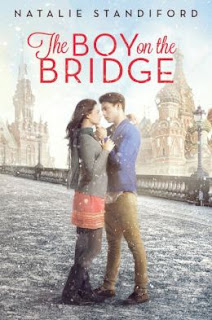 Laura has always been fascinated by the Russians -- their murderous history, crazy rulers, and forbidding landscape.  So, it is a dream-come-true to come to Leningrad to study at the Pushkin Institute in the Winter of 1982.  Now, for the younger ones out there:  this is before Putin, Yeltsin, and Gorbachev -- it's the tail end of "the period of stagnation" (the dying days of Brezhnev) when the Soviet Union, while faded, was dozing in the glorious perpetuity of authoritarianism. It's a grey time and while things will change dramatically is six to seven years, no one knew that at the time.

One early day, on the bridge that connects the main part of the city to the island where Laura's dorm is located, she meets Alyosha.  He is a revelation to her -- sensitive, romantic, and mature.  He is different from Americans, and she is curious.  Curiosity, in turn, becomes infatuation.  It's a difficult relationship to maintain -- socializing between Americans and ordinary Russians is discouraged and Laura and Alyosha must sneak around a bit to be together.  But as their relationship becomes more and more serious, they care less about the consequences.


The book fascinated me.  My own travels in Russia don't start until nearly five years after this story takes place, but from what I remember of their early trips, Standiford nails the details spot on.  She obviously took good notes during her own stay in Leningrad (and the novel is either autobiographical or a mash-up of experiences of her compatriots).  Dom Knigi, Cafe Sadko, and even the Uncle Sam's at the US Embassy are real places and they are described accurately.  But moreover, Standiford captures the nuances of Russians and the awkwardness of American-Russian interactions in pitch perfect detail.

More importantly, the misunderstandings and jealousies that complicate American-Russian romances which are described herein are painfully familiar (I myself decided that I was going to marry my Saint Petersburg girlfriend some ten years after the events in this book -- and we went to many of the places that Laura and Lyosha chose to visit and had similar conversations).  Needless to say, I have a good position from which to judge this book (I lived this story myself) and it brought back many memories.

But I wonder what the book would mean to other people?  The Soviet Union is long gone and forgotten.  It's not a piece of history that is likely to resonate with adolescent readers.  And Laura's romance (and its difficulties) will sound awfully strange to people today.  This is a period piece -- a perfect one at that -- but still an alien world.  And the story is not helped by its rather clunky third-person voice, which feels distant and detached.  So, I can't imagine where the book will find its readers, unless there are more nostalgic folks out there who can remember what it was like to walk along Fontanka with the love of your life!

By the way, the cover, which looks like it came out of a Sims game, is really quite creepy when you stare at it too long!


[Disclosure:  This book will be released on July 30th.  I received an ARC from the publisher and no further compensation.  I'm donating the copy I received to my local public library]
Posted by Paul at 4:01 PM