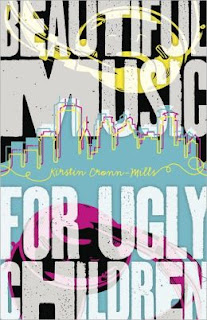 In a small town south of Minneapolis, Gabe dreams of making it big as a DJ.  He's got a mentor next door, an old man with an amazing collection of music (and some great stories about Elvis).  The neighbor even lands Gabe a late-night slot on the community radio station, where Gabe plays classic rock for a show he calls "Beautiful Music for Ugly Children." The show is a big hit with the kids at school and Gabe builds up a following. There's just one problem:  Gabe's birth name is Elizabeth and just about everyone off the air knows him as a her.

Since Gabe was little, he's known that he wasn't a girl, even if his body didn't agree.  When he was younger, he dressed the part and played with the boys.  But what was cute or maybe awkward growing up has now become dangerous.  At first, Gabe hopes that he can remain anonymous on the radio, but what will happen if the kids at school figure out Gabe's identity?  But even that is not so simple: at the same time, Gabe welcomes the danger -- he's tired of being in the closet and hiding his identity from his family and friends.  But, even for those who accept him for who he is, stepping out has its costs and unexpected complications.

There's a bit of a split focus to the story as it tells the more conventional story of seeking fame in the radio industry, but combines it with the more unusual quest by Gabe for acceptance of his transgendered state.  Of the two stories, I found the first one to be the weakest.  I lose patience with YA writers who can't be bothered to give their characters contemporary music tastes (C'mon! How many teens really care about Matt the Hoople!?).  It either seems like the author is too lazy to study contemporary music or they hate what the kids are listening to.

But the story of Gabe's struggle to break free of his Elizabeth identity was much more compelling.  Just how much?  Well, I very nearly missed my flight reading in the airport and, once on board, completely missed the flight attendant asking me if I wanted something to drink!  I was totally out of it, being so sucked in to the story.  I liked Gabe.  I liked his way of handling people.  I was fascinated by his relationship with his BFF (the straight and very confused) Paige.  The mentor, the parents, and even the kids at school were all interesting.  No easy answers, not even a complete ending, but plenty of things to think about.  In sum, a nice addition to the very small "T" section of LGBT literature.
Posted by Paul at 4:00 PM