Every Other Day, by Jennifer Lynn Barnes 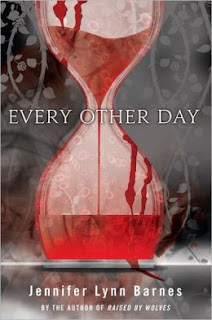 Kali has a double life:  one day she's an invisible sixteen year-old, but the next day she's a killing machine hunting down hell hounds, basilisks, dragons, and other "preternatural" creatures.  She doesn't know why she has to endure the cycle, but simply that it's been that way since she hit puberty.  On the days she is the hunter, she is invincible and capable of anything.  On the other days, she is vulnerable and fearful.

For the most part, she keeps a low profile and doesn't reveal her alter ego, but one day that changes.  At school, she notices that Bethany (one of the cheerleader/It girls) has been marked by a demon in a way that indicates that she will die within the day.  Despite the social class divide, Kali is determined to save her, but there is one problem:  it's the wrong day!

If this description (which more or less follows the book's jacket blurb) was the extent of the story, it would have been a clear riff on how a nerd and a popular girl became friends facing a mutual adversary.  The trouble is that this part of the story wraps up after about 120 pages, leaving an additional 200 more in which to unfold a pretty complicated plot that lacks consistency.  The story was far more interesting when it was simpler (awkward girl fantasy about using superhero powers to save the popular girl and gain acceptance).  Once it becomes an industrial conspiracy and every adult (including the parents) are involved in it, the story gets silly and drags.
Posted by Paul at 4:14 PM