Fingerprints of You, by Kristen-Paige Madonia 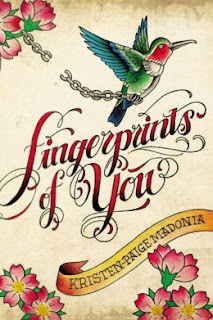 Lemon has been dragged from one town to another by her single mother for the past dozen years, a process that she despises but has grown used to.  However, on this latest move (to Morgantown WV), she's in trouble:  she's gotten pregnant from her Mom's ex-boyfriend.  Determined to keep the baby, but aware of the uncomfortable parallel's with her own mother's decision to keep her but flee her father eighteen years ago, Lemon decides that she needs to get away.

She convinces her friend Emmy to join her on a cross-country roadtrip to California, where she hopes to find her father (who she's never met).  Classic road-trip story unfolds and California offers its shares of surprises and revelations to the girls.

Coming with a warm endorsement from the Godmother of YA (Judy Blume), the novel actually manages to live up to the hype.  Madonia writes fluidly and creates complex and interesting characters.  The actual plotting of the story can be a bit broken (Madonia has trouble foreshadowing properly and the ending of the book drags on a bit), but the characters make up for these flaws.  Both adults and children have their share of strengths and flaws, and their interactions are mature and realistic.  Key amongst these is the complicated struggle between Lemon and her mother that forms a fascinating thread throughout the story.  Rather than just stringing raging dialogues together (as most YA books do), Madonia takes the time to explain each side's point of view in reasonable terms.  Mother and daughter clearly love each other, even when they don't quite see eye to eye.  And the dramatic arc of the novel basically recounts the ways that Lemon comes to understand how her mother's fingerprints are really found all over her life.
Posted by Paul at 3:53 PM

Thanks for taking the time to read and write about Fingerprints of You! I'm glad to hear you enjoyed the book...
K-P