I Swear, by Lane Davis 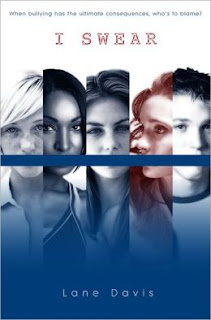 When senior Leslie ends up dead in her garage, there is no question of how it happened (she intentionally asphyxiated herself with car fumes), but there is the open issue of why she did it. The student leaders in her class rally together to form suicide-awareness rallies and peer counseling groups, but an uncomfortable truth hangs around them:  Leslie was bullied by precisely the same group that is now leading the charge to heal their classmates.

When Leslie's parents file a wrongful-death suit and the subpoenae start to be served, the kids circle their wagons.  Led by media-savvy queen bee Macie (herself the daughter of a local politician), they try to deflect responsibility.  But their guilty recollections to each other (and eventually to the authorities) reveals a variety of motivations that could lead a group of teenagers to drive a classmate to her death.

The story is, of course, chilling to read for anyone who was even mildly teased in school.  It is also naturally cathartic to watch a conspiracy fall apart (although the less-than-happy conclusion will disappoint readers clamoring for blood).  Beyond those primal instinctual appeals, the story doesn't boast much depth in its plot or its characters.  It's a good story and one that probably needs to be told a few more times, but much potential complexity was sacrificed for a slick story.  At the end, as the guilt-ridden ones are baring their souls, I wouldn't have minded learning something that would have painted a more complex explanation of bad behavior.  I think I was supposed to forgive some of these kids, but I honestly didn't find much to redeem them!
Posted by Paul at 4:12 PM