Kill Me Softly, by Sarah Cross 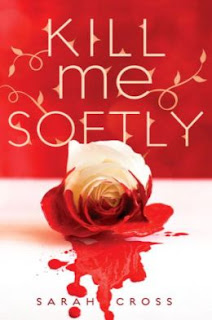 Growing up, Mira's godmothers (who took over raising her when her parents died in a fire) have kept a close eye on her.  They have a strict set of rules, including a few odd restrictions like not handling sharp objects.  But as Mira's sixteenth birthday approaches, she decides that she must break one of their most important rules: never returning to Beau Rivage -- the town where she was born and where her parents died.

So, she runs away from home and shows up at the town.  Her goal is to scour the town's graveyards and find her parents' grave, so she can finally come to terms with their demise.  Instead, she finds a town with an obsession with fairy tales and befriends two brothers who run a local casino:  Felix and Blue.  Felix is charming and takes Mira in, while Blue seems angry at everyone (alternating between attacking his brother for scamming on Mira and sniping at Mira for being receptive to Felix's overtures).  But something more serious is going on here than just fraternal jealousy.

A creative and unique twist on the Grimm's tales, combining the dark and nasty side of the originals and placing them in a contemporary setting.  The details are complicated and can't really be revealed without spoiling the story, but suffice it to say that it mostly works.  The result is a steamy adventure story that tends to work best when it focuses on action, overcoming destiny, and some good hacking and slashing.  The romantic parts try a bit too hard and the combination of curses and lust is heavy handed -- the type of thing that sounds good in theory but which reads like wet cardboard.

The ending becomes particularly messy as two very important threads (one involving Felix and the other concerning Mira's parents) get suddenly dropped and forgotten in favor of a romantic subplot that most of us could see coming.  It's not a bad twist, but the decision to completely drop the ball on the primary plot lines is a bit jarring, to put it mildly. So, bag the last fifty pages or so, they will just drive you nuts and take my word for it that the story was never wrapped up.
Posted by Paul at 5:04 PM