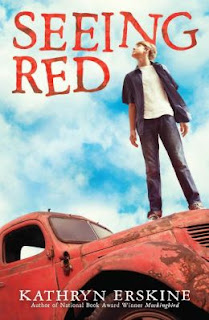 In rural Virginia in 1972, Red knows that bigotry and racism are wrong, but he also sees plenty of otherwise responsible adults engaging in it.  The children around him emulate the adults and his think nothing of expressing opinions and using words that Red was never allowed to express by his late father.  When an error in judgement causes Red to betray his African-American best friend, Red comes to understand the intoxicating effect of racism.  But there are darker secrets from the past that Red must confront -- a secret that may have even been responsible for killing his father!

It's a classic American novel setting:  boy growing up in the South finds and confronts racism in his community.  Erskine isn't breaking new ground here and her characters (from the wide-eyed boy to the wise old African-American woman to the slow-witted but gentle giant are all part of the well-worn cliche.  Whether it has any basis in reality is completely irrelevant: these are archetypes and you can pretty much picture the discussion guide that will go along with the chapters (I was actually surprised that the book didn't come pre-equipped with one already).

Does it deserve the attention?  Actually it probably does.  Not so much because of the setting or the characters, but for what else Erskine is trying to do.  The book isn't so much about racism, but about race relationships in a post-racist world.  By which, I mean:  how does one come to terms with the history of institutionalized racism when it is supposedly past?  How do you accept the role that your ancestors played in it?  That's an interesting idea and not as frequently explored in literature, particularly children's literature.  How much that will register with children is a bit of a guess since the book itself is placed nearly in their grandparent's era.


[Disclosure:  I asked for and received an advance copy of this book (it is slated to be published on September 24th) from the publisher free of charge.  I will be donating the book to my public library.  I do not receive or solicit compensation for any of my reviews.]
Posted by Paul at 8:00 PM