What Came From the Stars, by Gary D. Schmidt 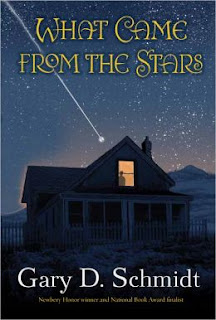 The Kingdom of Valorim has come under a terrible siege.  As the barbarian O'Mondim are breaking through the defenses of their fortress, the doomed Reced bind their power into a chain and send it far away to a distant galaxy.  Denied what they came for, the enemy swears to find the chain and gain the power necessary to rule their new thrones.

Far far away in Plymouth, Massachusetts, Tommy Pepper is celebrating his birthday.  Unfortunately, instead of getting anything cool, he has been saddled with an embarrassing gift (a lunchbox suitable for a little kid) from his grandmother! Heedless of the irreparable harm that showing up with an uncool lunch pail will cause, Tommy's parents insist that he take the lunchbox in to show his friends.  But as Tommy's social standing is about to endure a fatal blow, he finds a mysterious necklace inside the box with his lunch.

In the days that follow, Tommy discovers that he has the ability to see things that no one else can see, draw so well that his sketches seem to come alive, sing beautiful songs that no one has ever heard, and even to see his dead mother.  Realizing that it all has something to do with the mysterious necklace, he is determined to keep these new powers.  Which is about the time that the bad guys show up....

The result is a terribly clever and well-written fantasy-adventure, which manages to squeeze in some poignancy as well.  The fantasy elements are intentionally over-blown in the form of a mild satire (along the lines of the movie Super 8) which is cute but drags.  Instead, the story moves along best when it is stuck on Earth.  And while there isn't much room to effect something original in Middle Grade Fantasy, Schmidt seems to have pulled it off, producing a story with enough soaring adventure and down-to-Earth middle school drama to appeal to its target audience.
Posted by Paul at 3:52 PM