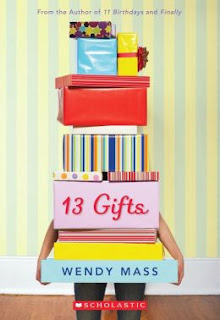 Because of some trouble at school (involving the kidnapping of a goat), Tara's parents decide that bringing her along with them on an upcoming trip to Madagascar might not be a good idea.  Instead, they send her to live with her aunt, who lives in her Mom's old home town (where Tara has never been).  There, she makes new friends, loses her shyness while engaging in an elaborate scavenger hunt, and discovers hidden talents, all because of a mysterious woman named Angelina (with whom readers of the previous installments in this series will be well-acquainted).  It all ends with a rousing performance of Fiddler on the Roof and some wild twists and turns that introduce the next installment (to be reviewed in a few weeks - stay tuned!).

While this is a series (third out of four and counting) and thus I should be predisposed to hating it, Wendy Mass writes such wonderful books for middleschoolers that it's hard to dislike this charming coming-of-age story. I love the way that the characters can have coed adventures with a middle-schooler's (age-appropriate) awareness and curiosity of the opposite sex, but make no big deal about it.  Getting kissed by the right boy would definitely be a lot of fun, but there's a mystery to solve!  The adventure itself is giddy stuff (I myself almost squealed with delight when teen heartthrob Jake Harrison made a cameo appearance!) and keeps the pages turning.
Posted by Paul at 8:45 PM

I agree- it is a charming series! I'm currently reading the final book, The Last Present, and enjoying it lots!