Boys, Bears, and a Serious Pair of Hiking Boots, by Abby McDonald 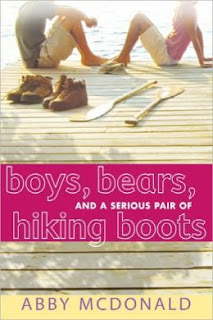 When Jenna's parents announce that they are both going away (to different places) during the upcoming summer, she suspects that they are separating.  However, her immediate worry is that she is not going to be able to engage in the eco-activism program she and her best friend are planning.  And while their plans seem to be wrecked, Jenna is eager to avoid the probability of going with her mother to Orlando and hanging with the over-65 crowd.  It's her friend who points out that Jenna does have a godmother Susie living in rural British Columbia.  There's plenty of nature therefor a green activist, and she'll be able to help her Susie set up a new Bed and Breakfast (and maybe even arrange an eco-tourism package while she's at it).  Jenna is excited when she convinces her parents to let her go.

But things don't go smoothly when she finally gets there.  Susie's sullen step daughter Fiona is a major pill.  The other kids in their small town aren't terribly friendly and they become downright hostile when Jenna tries to lecture them about environmentalism.  But once the initial bumps are overcome and Jenna learns to be a bit more sparing with the rhetoric, things smooth out and an exciting summer awaits.

An above-average summer read, with a bit of adventure in the woods led by an energetic (but lovably self-mocking) narrator.  There's plenty of humor, some light romance, and a little drama to move things along.  The kids are all memorable and appealing in their own right.  The adults are realistic, but conveniently distant and unobtrusive.  It's not fluff, but nothing too weighty holds this story down (even if McDonald does toy briefly with the topics of divorce and homophobia).  In sum, a nice light read.
Posted by Paul at 8:30 PM