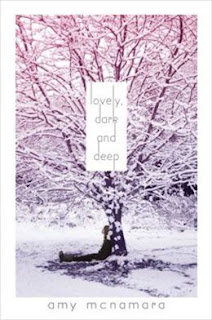 After living through a car accident that killed her boyfriend and her unborn child, Wren flees to remote Maine to live in her father's house and just sort things out.  Worried by Wren's lack of activity, Wren'smother who tries to get Wren to do something and pressures her ex-husband (the parents were divorced long ago) to nudge Wren out of the house.  Both of their clumsy attempts are rebuffed by Wren.

Instead, Wren meets a young man named Cal with issues of his own.  And in sharing their issues with each other, Wren and Cal develop a relationship on their own terms.  However, their  friends and families worry that neither Wren nor Cal are in any shape to take care of each other.  They may be in too deep.

A slow-paced but ultimately authentic look at depression.  McNamara captures well the spiral of a young person very much sucked in by her grief. And, however much it may offend fans of this sort of story, I found that excruciating, not "insightful."

While the grieving process can take considerable time and there is no doubt that well-meaning (but ultimately pushy) family members in Wren's life should have laid off, it really does get very old to listen to her rant on about how every thing that happens is just some attempt to hurt her.  Wren's combination of adolescent self-centeredness and arrogance gets old pretty quick.  I presume that McNamara believes that Wren's persecution complex is a sign of strength, but it is pretty obvious that Wren is in fact her own worst enemy.  When someone is nice to her, she relabels it as pity or lack of trust.  When someone gives her space, they are neglecting her.  And when someone tries some tough love, she whines that they just don't "understand" her.  However, Wren doesn't want to be understood and needs, in fact, to drag out her misery as long as she can because it has become habit and provides the only meaning at the psychic corner into which she has painted herself.

Kudos to the author for portraying the downward suck of depression so accurately but shame on her for not calling it out as a dead end.  The process (of healing) will come when Wren realizes that there are other behavior patterns (like caring for Cal) that are worth following and which don't have to hurt as much as the path she has chosen.  But that piece of good news is not really the purpose/goal of this harrowing story.
Posted by Paul at 8:00 PM