Heaven Is Paved With Oreos, by Catherine Gilbert Murdock 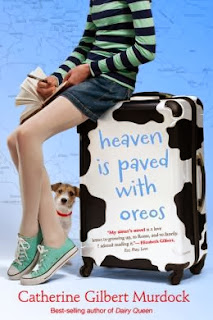 Sarah has a typical share of fourteen year-old's problems:  a mother who's always watching her, a friend who's a boy but not a boyfriend (or maybe not!), and a bitter rival at school.  But everything is about to be put in perspective when her eccentric grandmother announces that they are going to Rome (as in Italy)!  At first, no one is particularly excited about it, but Sarah's parents come round to the idea that it could be a great learning experience.  And as for Sarah?  She hopes that getting away will just help her sort out things with friend-who-is-a boy Curtis.

The trip turns out to be a true adventure.  From all the things that are new (despite Sarah's attempts to survive on familiar food, she finds that even pizza is different in Italy!) and all the things that are old (like the churches), Sarah and her grandmother have a major cultural outing.  In the last days there, however, something happens to grandma:  she becomes withdrawn and depressed, and she makes a shocking confession to her grandddaughter.  When they return to America, Sarah has to deal with it and what it means for her family.

In my mind, the very best thing about this book is the title.  But although Oreo cookies are invoked several times in the book, the story itself is really about family secrets and learning from the mistakes of the past.  That's a bit hard to suss out as the narrator is a realistically scattered fourteen year-old. Realistic, but not really very enticing for a novel.  There's a lot of ambition in the story, but it never quite gets the gravitas it needs.  And I keep wondering about Murdock's obsession with Wisconsin (she really doesn't seem to know much about it -- wouldn't her native Pennsylvania provide the appropriate rural setting she needs?).
Posted by Paul at 7:47 PM