Just One Day, by Gayle Forman 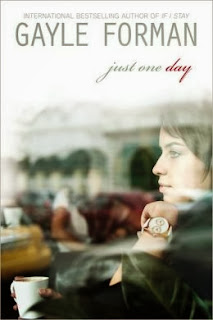 A chance meeting with a Dutch actor named Willelm in London, sends American high school grad Allyson on an impulsive trip to Paris with him.  The two of them spend a whirlwind day together, but in the morning he is gone.  Panicked by the abandonment, Allyson barely makes it home to the States.

For the next year, Allyson is obsessed with figuring out what happened.  And, not content to let the matter drop, she makes arrangements to return to Paris to look for Willem, a move that neither her friends or family understand.  But along the way, she comes to understand that this need to close a chapter in her life is about much more than a one day fling.

While it starts off as a variant of the Before Sunrise/Before Sunset story, Forman takes her tale of an impulsive love that becomes a year-long obsession into much deeper territory, exploring how chance meetings can change lives (and, in fact, cause us to reexamine all of the parts of our lives which we do plan) in a way that those movies never had the opportunity to explore.  And it's a well-written story with great character depth (surprising, given the large and diverse cast of characters that play parts in the story).  The pace is brisk, but various different settings (London, Paris, school life in Boston, and The Netherlands) are well-developed.

I enjoyed the read and the found it easy going, with one exception: the editing.  Nothing is more distracting than a well-written book which is edited horrendously.  Either Forman had a lousy copyeditor or she was too lazy to read her galleys, but when I can casually count over ten typos without even trying to notice them, one really has to wonder why anyone would take a book that otherwise represents a huge effort and release it so sloppily!
Posted by Paul at 8:48 PM