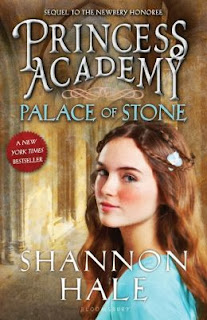 In this long-overdue sequel to Princess Academy, Miri and the girls of Mount Eskel have come to the capital Asland to help their Britta prepare for her wedding to Prince Stephan.  It's exciting for Miri to finally see the city that they have only heard about before.  Everything is so much grader than they have ever seen before!  But their arrival comes at an inopportune moment.  Unrest is afoot and a revolution is beginning to stir.  On their first day, an assassination attempt on the king is barely averted before their eyes.

The unrest is directed at the rulers, but Mount Eskel itself is in a precarious position.  As Mount Eskel's delegate Katar explains to Miri, it is critical that they (as the newest members of the kingdom) position themselves well, regardless of the outcome.  To that end, she entrusts Miri with the task of finding the rebellion and ingratiating herself with its leaders (dangerous and tricky when one of your own is about to marry the King's son!).  Through what seems like luck, Miri succeeds in the task when she befriends a young idealistic student named Timon.  But Miri gets more than she wished for.  At first, Miri is personally very taken by the goals of justice and equality for which the revolutionaries are fighting.  She finds herself drawn to Timon and even begins to question her attachment to her simple boyfriend Peder from home.  But as the situation grows dark and dangerous, Miri discovers that she is trapped in her new subversive role.  And being a revolutionary means not only plotting against the King, but also betraying her friends and homeland.  As the masses start to rise up, Miri finds that she must tread carefully through a series of difficult decisions to stay alive and protect her home.

It's all a bit darker than the original story.  Hale has drawn a great deal from the history of the French Revolution to show how dangerous uprisings are and how easy it is to get caught in the crossfire.  The novel itself is an engrossing tale of politics, intrigue, and loyalty.  In her usual style, the grownups are generally helpless and stubborn, so it falls on the adolescents to rise to the occasion and save the land.  That is convenient for the story, but it also provides a pleasing dramatic arc as Miri fully comes into her own.

This is truly a magical work which expands the potential of YA fantasy literature!
Posted by Paul at 8:22 PM