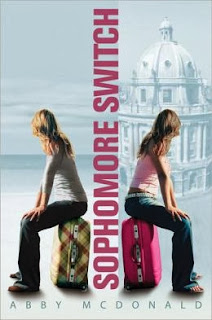 As far as bad decisions go, Tasha's impulse to make out with a teen idol at a party ranks pretty high (especially when a video of the moment goes viral on the Web, earning her an international reputation as a sexual predator and all-round slut).  Desperate to get out of the limelight (and get away from California), she jumps at the opportunity to go on an academic exchange. Meanwhile, prim and hyper-organized Oxford undergrad Emily is less driven by recent events than simple bad luck.  Her application has gone astray and now there are few remaining opportunities for study abroad.  The chance to swap with an American girl attending UC Santa Barbara seems the best option she has.

Two totally different personalities swap places to the most inappropriate of choices.  But, as one would predict in a novel, the initial fish-out-of-water experience gradually turns to acceptance and life-changing success.  Both girls learn something about themselves from walking in each others' shoes.

What is somewhat more surprising, given the book's general lightweight focus on fun and parties, is the strong empowerment message that comes through by the end.  As McDonald writes in the afterward, she was particularly interested in exploring the sexual politics of the younger generation. That said, McDonald has created a bit of a straw person, by creating an overly simplistic reading of feminism as anti-sex (focusing in particular on Andrea Dworkin and Catherine MacKinnon) in order to show how these two young women break free of such old fashioned ideas.  However, there has always been a significant body of literature out there exploring the place of desire in defining identity, so McDonald (and Tasha and Emily) are hardly stepping in new ground.

There are other issues with the story itself.  Some of them are little (claiming that Rousseau wrote Civil Disobedience) while others are bigger (in what exchange program would student swap entire class schedules -- trying to attend each others' classes?).  But I may be taking it all a bit too seriously.  The story itself is great escapist fun, with some light romance and a bit of drama to keep things interesting.
Posted by Paul at 9:23 PM