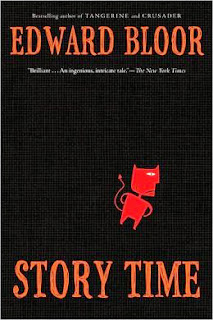 When Kate and her uncle George (who is two years younger than her) find out that they have been accepted into the Whittaker Magnet School, they have opposite reactions.  George is excited.  It is just the sort of environment where he can finally spread his wings and excel.  He's managed to score the highest score on the school's entrance exam ever.  And the school's focus on standardized testing plays to his strengths.  Kate, on the other hand, is no genius and the change of schools will prevent her from auditioning for Peter Pan this year.  Kate's mother languishes in depression, while her grandparents (George's parents) are lost in their floor-shattering clogging practices.

Regardless of initial impressions, the school itself proves to be a nightmare.  It teaches quite literally to the test, subjecting its students to continual bubble-filling, brain-enhancing drinks, and rote memorization (and phonics!) for the younger kids.  The school is a conglomeration of everything that is wrong in modern schooling.  And all of this before accounting for the demon that is possessing people on the school grounds or the disastrous visit from the First Lady of the United States!

A bit long and not nearly as funny as Tangerine, Bloor still has a good time making bitter fun of the American education system.  Younger readers may find the chaos to be great fun in itself, but even middle readers will recognize the satire.  Taken seriously, the book (with numerous serious injuries and sundry dead bodies) is grotesque, but it works wonderfully if you don't get too literal with any of it.  Unfortunately, that is where the problem of length sets in.   Being a satire, we don't have any attachment to the characters.  Instead, the story rests on humor.  The wit gets a bit tired after the first 200 pages.  By the 400th page, we're more than ready for it to wrap up!
Posted by Paul at 7:38 PM