The Anti-Prom, by Abby McDonald 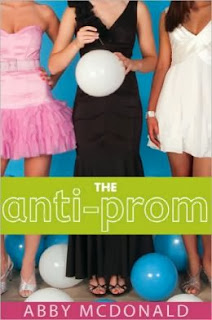 When Bliss Merino catches her BFF and her boyfriend doing the nasty in their group's rental limo at the Prom, she wants revenge.  However, she's better at fashion than vengeance and she could use some help.  That help comes from an unlikely source: the local "bad girl" from the wrong side of the tracks, Jolene Nelson (who has her heart set on a little vengeance as well!).  Neither of the however have the transportation they need, so they recruit wallflower Meg Zuckerman to drive them around.  And on the night when all three girls thought that they would be celebrating their Prom, they end up doing something very different.

Compared with McDonald's other books, this one is bit more slight.  The idea that three mismatched kids will come to understand each other and bond in a wild night of adventures is pretty formulaic.  And while there are a few twists, we don't stray very far from the formula here.  Still, if you don't mind predictability, it's an entertaining enough read.  The characters are
Posted by Paul at 4:57 PM