The Last Present, by Wendy Mass 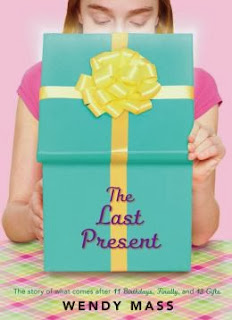 In the fourth (and probably final) installment of Mass's Willow Falls series, many mysteries are revealed and loose ends are tied up.  It begins where the third book left off:  with ten year-old Grace falling into a inexplicable coma.  The ever- cryptic Angelina knows more than she's saying, but what she is saying is that Amanda and Leo (just off of their own one year vow against speaking to each other) must team up again, travel back in time, and revisit each of Grace's previous birthdays.  Their mission is to distract Grace's brother who somehow manages each year to mess up the birthday parties and thwart the magic that could eventually save Grace in the present.  Yes, the adventures of Willow Falls continue!

While this continues to be a clever series, I think it probably is time to retire it.  While the third breathed new life into the franchise with new characters, here we are mostly revisiting old friends.   That said, I still enjoy the kids and their adventures and the mixture of fun and the awareness of their own growing up (there's a bit more kissing in the latest book!).  Wendy Mass writes true quality books for middle readers and deserves the attention she gets.  That said, you wouldn't want to pick this book up unless you've read the preceding installments (in order) as there's no allowance for getting up to speed.
Posted by Paul at 7:17 PM